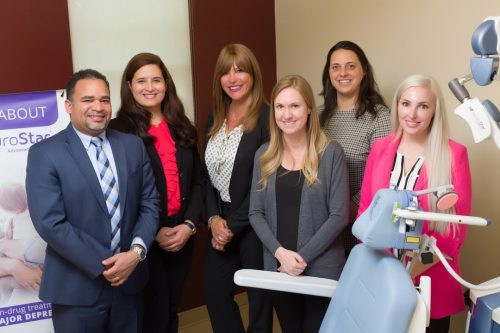 New Castle, PA. Clinical depression is a common but serious medical illness that negatively affects how people feel, think, and act. According to the National Institute of Mental Health, an estimated 17.3 million adults, or 7.1% of all adults, in the United States have had at least one major depressive episode. On the global scale, more than 300 million people worldwide are estimated to have depression.

Antidepressant medication, psychotherapy, and changes in lifestyle are common initial recommendations for patients struggling with symptoms of clinical depression. For patients who are coping with major depressive disorders, antidepressants can play an invaluable role. However, for ones who experience what is known as treatment-resistant depression, standard medications may provide little or no relief, and each subsequent medication taken is less likely to help than the one previously used.

The residents of Lawrence County, Pennsylvania, and the surrounding areas now have access to one of the most advanced methods for treating clinical depression: transcranial magnetic stimulation (TMS) therapy. Compassion Mental Health Services (CMHS) has recently added NeuroStar’s FDA-approved SMS therapy to its behavioral health services, especially for treatment-resistant adults suffering from depression who have not experienced full recovery from medication-based therapies.

Able to be performed as an outpatient procedure, TMS therapy does not require any anesthesia or sedation. Using a magnetic coil, NeuroStar’s TMS therapy system generates highly concentrated magnetic fields that rapidly turn on and off. The electrical currents generated as a result activate cells in the brain thought to release neurotransmitters such as serotonin, norepinephrine, and dopamine. TMS can restore the balance of those neurotransmitters and, in turn, relieve depression. At least 60% of people with depression who have not benefited from medications have experienced a clinically meaningful response by using TMS.

“We’re excited to offer this cutting-edge medical technology to adults struggling with treatment-resistant depression,” said Dr. Santiago A. Almanzar, founder and CEO of CMHS. “Our practice is committed to continuing to provide the latest in mental health treatments, and offering NeuroStar’s TMS therapy is an important step in that direction.”